Once you have a few experiments up and running within the Taplytics Experiment Dashboard you will notice that there are buttons to pause or archive experiments. 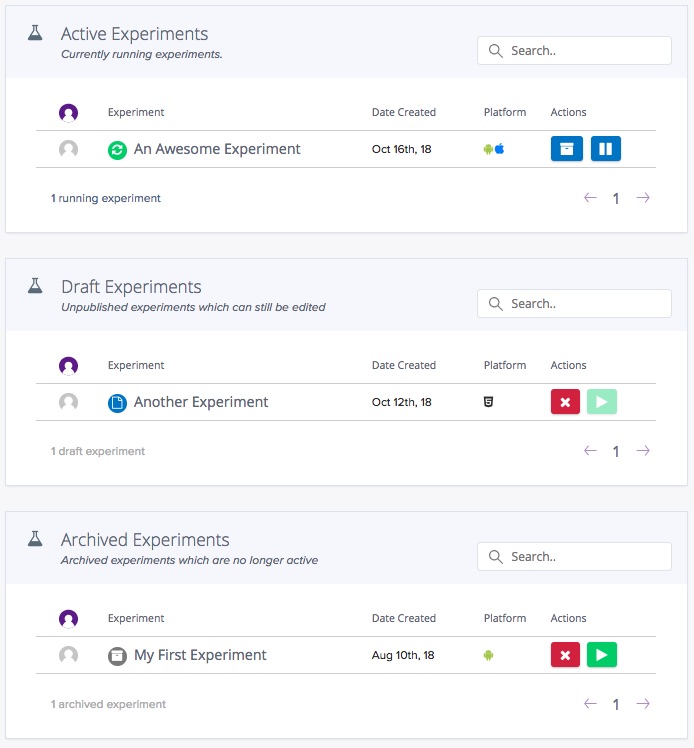 This article will explain what each of the different experiment states are and how they affect users.

None of the changes you make while in Draft will be live for production users
While an experiment is in draft mode, you can think of it as a safe sandbox where you're able to play around with your app to see what elements you can edit/change in your app.

While your experiment is in Draft is when you would confirm your setup and perform other QA testing. From here, you can distribute it to your intended segments/audiences and set up your goals before you actually Launch your experiment.

While an experiment is active, it is live to Production users.

At this point, variations are being distributed and data is being collected, which powers goals and any other pertinent data that you want to watch for in the goals section.

Any new users (e.g. those who just downloaded the app who qualify for an experiment) will be allocated into it appropriately, according to the distribution you set. When an experiment is in an active state, users will continue receiving their respective variations until you declare a winner or archive an experiment.

This ends an experiment and users will go back to a default state .

When you archive an experiment (thereby ending it), your users would go back to their default state before you started the experiment, and users will no longer be receiving any variations.

With your new findings, you can use those learnings and hard code it back into the app.

Updated over 2 years ago